We want to get straight into this article by telling you a big, fat YES! Cops can definitely tell if you have insurance by running your plates. The technology that they have requires little more than a number plate.

After running this, all of the car owner registration details will be available to them as well as information about the car including, of course, insurance details.

Police can now use their in-car computers to search on the law enforcement databases that they have access to and gain all kinds of information about our cars, and ultimately, us.

Around 10 states in total have automatic license plate recognition (ALPR) that can check if your car is insured automatically if you ever get pulled over. Other states need officials to manually input your information into their search databases or to check your documents.

It does, of course, vary depending on your state. Some states (in fact, the majority of them at 33) have an ‘uninsured drivers’ database in which insurance companies can track who is and is not insured.

The police do not have immediate access to these databases, though, and must call up the company first to ask them to check it. As well as this, some states have a policy that the DMV must tell the authorities when someone cancels their insurance policy.

However, this does not happen in every state. Some police officers may also call your insurance company to verify that you do have insurance. They tend to do this if they believe that the insurance documents you have provided them are fake. 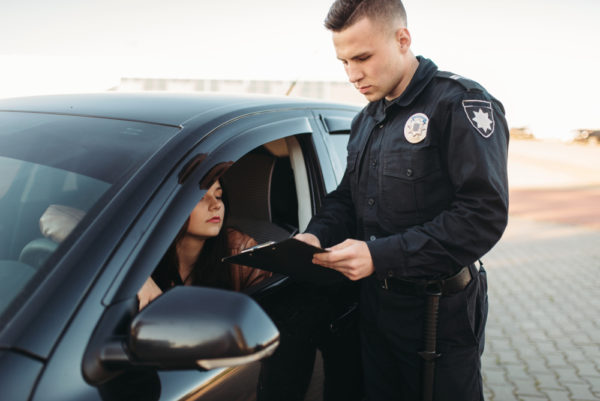 Why is it important that cops can check if your vehicle is insured?

The idea is that people will be so afraid of being pulled over by the police and facing the harsh fines and other law enforcement techniques that are in place in various states that they will simply not drive if their car is not insured.

It is important that police can catch this as it can help reduce accidents as well as ensuring that the community as a whole is cared for.

Why is driving without insurance bad?

Driving without insurance may not seem that big a deal, but that is only until something bad happens. By ‘bad’ we mean when they are hurt in an accident, their car is damaged, or they cause damage to another person, car, or property.

Most people only get bit by lack of insurance when they have an accident in their car or if someone damages their car. Without insurance, nothing can be done about it legally, and they cannot claim from anyone to fix the damage.

In some states, even if a person is catastrophically injured through the fault of another driver, if either party is without insurance they cannot make a lawsuit claim. This is thanks to strict stipulations in insurance law in some states.

For example, if the other driver is at fault, some states will refuse compensation altogether. One example of this is in one of the Southern States. In Louisiana, you would not get any compensation, regardless of whether it was the other driver’s fault.

They are very strict about driving without insurance. In other states, you may get some compensation but you will likely be very limited.

If you are at fault, the situation can quickly become very serious. You may be classed as a high risk driver, even if you have never had an offense before. This may hinder your ability to get insurance in the future which could, in turn, stop you from ever driving.

If you cause harm to another person or property you can get sued for hundreds of thousands of dollars. If the harm caused is very serious, or if you cause death whilst driving uninsured, you will certainly face even harsher penalties and sentencing.

All the damage you cause in an accident, and any damage caused to you by another driver will have to be paid for out of your own pocket. Car damage can cost thousands sometimes, which may mean you are unable to pay, therefore rendering your car unsafe and not able to use.

What can happen if your vehicle is found to be without insurance?

It should be noted that the legal implications can vary state by state if you are caught driving without insurance, but most states in America will at least issue a penalty fine for it.

You also risk having your license and car registration taken from you. You may even risk jail time! The consequences worsen if you are caught Driving Under the Influence (DUI), speeding, causing an accident, and other criminal offenses without having insurance.

You do not even need to be driving your car in order to be caught without insurance. Many states now monitor the insurance of cars electronically.

This can often mean that your car may get caught whilst it is unattended (i.e. you are not driving it). In this instance, your car may well be towed or fitted with anti driving equipment such as clamps to stop you from using the vehicle.

As well as this, as we mentioned a little earlier in the article, being caught driving without insurance can seriously affect your insurance rates in the future.

You will likely find that it will cost you far more to get insurance if you have previously committed a criminal offense including driving without insurance.

Insurance companies may even refuse to accept you as a customer as you may be classed as a high risk driver. It will go on your record as a car owner.

So, to reiterate - yes, a cop can tell if you have insurance by running plates.

They also have a number of other ways they can check the insurance status of your car. We hope that this article has proved useful for you and answered your question completely.