Driving, in itself, is fairly easy. However, driving correctly and following road rules properly can be a little trickier.

It’s no secret that most drivers struggle to remember all of the driving rules once they’ve passed their driving tests, so it’s easy enough to doubt whether something is illegal or not.

Things such as whether it’s illegal or not to pass on the right are easily forgotten over time, but it’s important to get that memory refreshed and be aware of the dos and don'ts of driving to ensure everyone on the road is safe.

So, is it illegal to pass on the right? The general rule when driving is that you should pass other cars on the left, leaving slower vehicles to remain on the right lane.

But what about when you’re stuck behind a slow vehicle on the left lane? Or what about when a car is going to turn to the left? Is it different on highways and inside cities?

There are so many rules that it can get confusing. Rules may vary according to different situations. In some places, it is indeed illegal to pass on the right, as it will be deemed unsafe driving. In that case, if you’re caught, you get a driving ticket according to the level of endangerment you caused.

However, if it is deemed to be one of the exceptional situations in which passing on the right is necessary and okay, then you should be fine.

At the end of the day, you should always follow the road signs and indications of authority, and you should never perform any driving maneuvers that might endanger yourself or other vehicles on the road.

Always drive carefully and be wary of your surroundings. And remember, that even if you’re being careful or are driving properly, others around you might not! 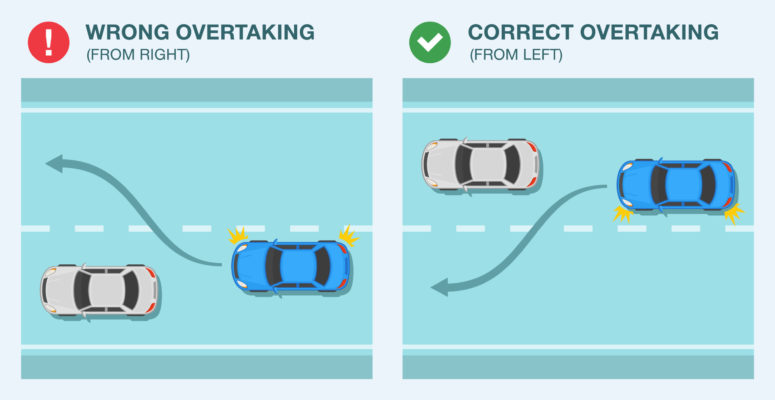 Is it illegal to pass on the right?

Legally speaking, all drivers are generally required to drive on the right lane of the road, even when there are multiple lanes. The left or center lane is left for overtaking and passing maneuvers.

This implies, therefore, that the right lane is not to be used for passing, but for normal driving.

Passing on the right side in a way that is deemed unsafe and that can potentially cause the endangerment of yourself and other people is illegal, and you could be fined with a driving ticket for doing so.

However, there are situations and cases in which passing on the right side is deemed an acceptable and necessary maneuver, and it is perfectly okay for you to do so as long as you’re being careful and no endangerment is caused by it.

Cases in which it is legal to pass on the right

To be safe from any driving tickets, and to maintain the overall safety of traffic circulation and driving in general, these are the few exempt situations in which you are allowed to pass on the right.

However, even during these situations, you should still ensure it is completely safe to pass on the right before doing so, as sometimes it can still be unsafe to do so.

It can sometimes happen that a left turn can be made from the road you are on, and the car in front of you is slowing down to take it.

A possibility is to stop and wait until it has turned, but this can actually be detrimental and unsafe, as it will stop the flow of traffic in a sudden way. Instead, you are allowed to pass it on the right, as long as there is enough room to do so in a safe way.

Also be aware, that the only way in which you can know for sure that the car in front of you is turning left, therefore making it okay for you to pass on the right, is if it has its left indicator on and is slowing to a stop for the turn.

When there are two or more lanes, there is plenty of room for you to pass on either side of a car without causing any major danger. However, you should thoroughly ensure that it is clear and safe to do so, and you should make sure to indicate appropriately.

You should also note that, as a general rule, when there are more than one lane cars should still stick to the right lane, allowing all overtaking maneuvers to occur on the left. So passing on the right is still an exceptional case.

When you drive on a one-way road, there are two or more lanes

This is a very similar case to the one stated right above. With multiple lanes, there is enough space to overtake on either side safely, as long as you have double-checked and the road is clear. (And, of course, you have appropriately signaled to avoid any accidents!)

However, once more, this should be done only as an exception, when a slow vehicle is remaining on the left. Usually, all vehicles should stick to the right lane, using the left ones to pass and undertake overtaking maneuvers.

Basically, you can do this when the car in front of you isn’t following the guidelines and rules, and you need to pass it because it’s going too slow.

As a general rule, all vehicles should stick to the right lane, leaving the center and left lanes for overtaking maneuvers. If you pass on the right, this is deemed unsafe driving and you are likely to get a driving ticket.

However, there are a few situations in which it is okay to pass on the right, as it is necessary in order to upkeep a normal flow of traffic.