The rules of the road vary throughout the United States, depending on which state that you are in. Rules for motorcyclists can be even more complex, with slightly different rules.

However, what one state might say is acceptable for a motorcyclist, other states might not. You are always going to want to stay on the right side of the law, and finding out what these laws say is very important for motorcyclists everywhere.

If you live in Florida, you might find yourself in a traffic jam and want to lane split to avoid sitting in it for a long time. However, the legality surrounding this action is where things get interesting.

Lane splitting is not legal in every state, and in some, you can get in trouble with the law for doing so. To find out more about lane splitting and the rules of the road for motorcyclists in Florida, just keep reading. 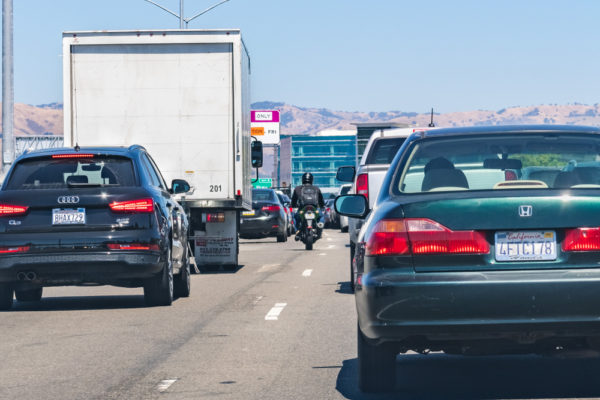 What is Lane Splitting?

Lane splitting is when you ride your motorcycle between lanes or rows of either slow-moving or stopped traffic that is moving in the same direction.

It is sometimes also referred to as white lining or stripe riding, and it allows the rider to save time by passing through traffic congestion.

It can also be safer than stopping behind a stationary vehicle, but some states do not agree with this and have laws to prevent it.

Is Lane Splitting Legal in Florida?

California actually lifted their ban on lane splitting in 2016, and it is thought that many other states have considered bringing in new legislation that legalizes lane splitting.

Motorcyclists are given the same rights as a driver of any other vehicle on the road, and they are entitled to the full width of a lane for safety reasons.

Due to this rule, no other car other vehicle is allowed to try and share the lane with them, and it can be really dangerous to try and do so because it could end up causing an accident.

We should start by saying that regardless of whether or not it might be safe to lane split, you should not do so unless you live in a state where it is legal. It has become a big topic of discussion in Florida as to whether the practice of lane splitting is safe or if it causes a dangerous hazard.

It is common knowledge that motorcyclists are much less visible than other cars on the road due to their size. This means that it could be easy for a motorcyclist that is lane splitting to end up in a driver’s blind spot, so a driver could pull out and hit the motorcyclist without even seeing them.

Even in slow-moving traffic, this could be a very dangerous situation for any motorcyclist to be in.

However, the other side of the argument is that lane splitting can actually help to keep motorcyclists safer on the road. This is because they would be much less likely to be stuck behind a vehicle if they were able to split lanes.

It is thought that lane splitting could be safe in traffic that is moving slowly or at less than 50mph, and if the motorcyclist were to not exceed the speed of other drivers by more than 15mph.

There is a lot of speculation surrounding this issue, and many states have considered changing the rule to allow for lane-splitting, but California is the only state to do this so far.

The Benefits of Lane Splitting

If motorcyclists were allowed to lane split and move in between cars, it would reduce the overall number of vehicles that are in each lane while creating an extra flow lane for any motorcycle traffic.

This would help traffic to move more quickly and efficiently and would make the amount of time that drivers are on the road slightly lower. This would reduce traffic congestion and make things move slightly faster.

Not only would this make traffic move more quickly, but it would also help to reduce air pollution, therefore having a positive effect on the environment. The emissions that are produced by vehicles on the road are a big source of major air pollutants. The amount of traffic on roads in the US is only increasing, and it will continue to do so over time.

Florida is a very warm and humid state that is warm nearly all year round. For drivers in vehicles, they can simply turn on the air conditioning to keep cool.

However, motorcyclists do not have this luxury, and they have to endure the warm temperatures, which is even more unbearable as they have to wear protective clothing that can easily become very uncomfortable in the heat.

For those motorcyclists who are outdoors for a long time when stuck in traffic in this weather, they can overheat and become unwell. If lane splitting was allowed in the state of Florida, the motorcyclists could reduce the amount of time that they are under the risk of the hot weather, which could arguably be a lot safer.

There is so much debate as to whether or not lane splitting should be legalized in Florida, but as of right now, it is not legal to do so.

These laws may change one day to follow in California’s footsteps, but you should not split lanes in Florida as of now as it is not deemed legal, and you can get in trouble for it.