Wherever you are, be it in your home state, a different state, or even a different country, you can guarantee as you’re driving down the highway, a motorcyclist will zoom past you, cutting between lanes.

You may see it happen all the time and wonder if it is legal, well, in the Lone-Star State of Texas, it is illegal. In fact, California is the only state to expressly legalize lane splitting.

While lane splitting may get you to places faster, the results of tragic motorcycle accidents due to lane splitting are horrendous and severe. Often, in-depth investigations are in place to see if the driver should be held liable for the accident.

Even in the sunny state of California, motorcyclists are warned to take caution when lane splitting, and it is only allowed during a steady, continuous flow of traffic. Lane splitting in heavy traffic is heavily frowned upon. 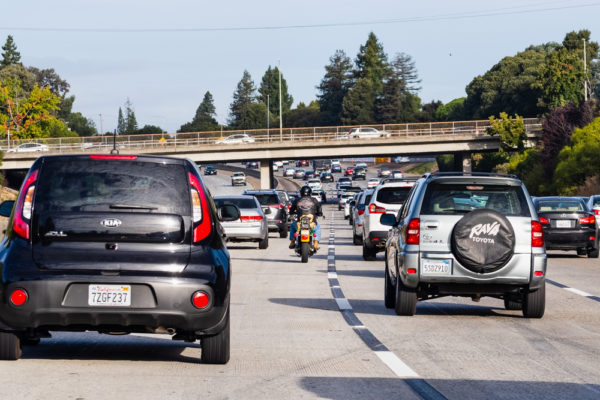 What is Lane Splitting?

Lane Splitting is the term for when a motorcyclist rides over the dashed lines between road lanes, to pass between two slower-moving vehicles. This is usually the most common in slow-moving traffic or stand-still traffic.

The vehicle departs between the cars or fellow road users and travels past them between the designated commuting lanes. It is most often used by motorcycle riders, it will usually cut their commute time down, but the laws and rules regarding lane splitting vary in each state.

It is considered very dangerous and inadvisable even in places where it is legal, due to the copious amounts of accidents that can occur as a result of irresponsibility when lane splitting.

In section 545.060 of the Texas transportation code, all drivers and motorcyclists must drive in a singular lane for any road marked with two or more lanes. A road user may change between lanes but they may not drive between the designated lanes.

Has anyone attempted to change Texas lane-splitting laws?

There have been two attempts to change Texas lane-splitting laws in the past. In 2016 a former Texas senator introduced SB 288 which would have allowed motorcyclists to lane split under certain circumstances and conditions.

These conditions were that motorcyclists would be allowed to drive for a safe distance between lanes of traffic of which were moving in the same direction in periods of congested traffic. This would have allowed circumstantial legal lane splitting.

The conditions were that it was legal in circumstances where operating at a speed of no more than 5mph than the rest of the traffic, and to only do so during congested traffic where there was a traffic speed of 20mph or less.

This bid did not make it, and again in 2018, there was another attempt to change this law, by another senator introduced a bill very similar to SB 288.

Once again this bill died in the committee, never making it to the roads.

There has been much dispute as to whether or not lane-splitting is a safe road action, as well as whether or not it is constructive in reducing congestion.

There have been statements made by motorcycle rider advocates in Texas, showing that lane splitting contributes to a reduction in rear-end rider fatalities. They have also argued that it can reduce rider injuries and decreases the severity of traffic congestion.

Despite this, in places where lane-splitting has been legalized, it is approached with grand caution. Regulations often prohibit the practice of lane splitting unless traffic is moving at a practical standstill.

The State that Made Lane-splitting Legal.

The only state in which lane-splitting has been made legal is California. In 2016 Senator George Jerry Brown signed Assembly Bill 51. This bill allows motorcyclists to drive between rows of stopped or moving vehicles that are in the same lane.

Outside of California lane-splitting is not legalized in any other state, though, some states do have bills that are still pending or have passed, that allows similar road conduct to California.

What is the difference between lane splitting, filtering, and sharing?

There are different types of motorcycle-specific lane disciplines that are under dispute by traffic regulations. These are lane-splitting, lane-filtering, and lane-sharing. They are all specific road disciplines for motorcyclists, but all mean different things.

What do they mean?

To conclude, lane-splitting is illegal in Texas, while it is legal under certain restrictions in California and up for debate in a few other states. Whether or not lane-splitting is traffic constructive and safe is a topic that is still being debated by senators and motorcycle advocates.

Regardless, lane-sharing is legal in Texas, though lane-splitting may not be. We can only conclude that lane-splitting, as of now is a debated topic due to safety, and should you not stick to these laws you will be approached as a violator of law in Texas.

It is always advisable to stick to the laws in place on the roads as they are there for the safety of yourself and other road users.