Whether it’s become relevant to your own life recently or you were just curious, you want to know what compensatory damages are.

Fortunately, you’ve come to the right place. We’re going to give you the rundown on compensatory damages, but not just what those words mean, we’ll also provide examples and cite some relevant case law to show you how compensatory damages work in the real world.

Of course, the real world is complicated and what may be called compensatory damages can differ between states and other sub-jurisdictions like counties, so we’ll try to be as in-depth as possible with our explanation while keeping it brief. 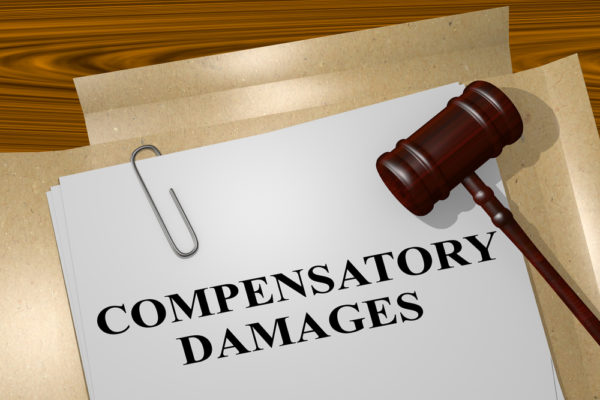 What Are Compensatory Damages?

Compensatory damage is an amount of money awarded to a successful plaintiff who manages to prove, in a court of law, that they have struggled with physical or financial hardship as a result of a loss that was the defendant’s responsibility.

In short, if someone’s negligence or illegal acts have led to your discomfort, a civil court can award you a lump sum of cash for the difficulties you have faced.

How much you get for compensatory damages will depend on the incident and the culpability and status of the defendant. You will have to quantify the loss from damages in the eyes of both the judge and a jury of your peers, which may need homework if you want to build a strong case.

You should keep in mind that this sum is set in stone. Compensatory damages are not punitive damages where there’s the possibility of being awarded more than you asked for.

Think of actual compensatory damages as setting a monetary goal ahead of you and, through providing sufficient arguments and evidence in court, you must prove that the losses you’ve experienced add up to that goal.

The multiplier method takes proven damages and, in the case of injury or serious harm caused to the plaintiff, they’ll divide the actual damages by a number meant to correspond to how grievous the injury or disruption was.

If you’ve wiped the dust off of your Latin, you may have figured that the per diem method revolves around days. In these cases, the court will attach a price to every day that the plaintiff suffered their loss. This is usually one dollar.

Then they add all of the days up, resulting in a system that awards more to those who have been more grievously offended.

Every court is different, so there may be slight variations or mixing of the methodology used, but they’ll generally fall into one of the two camps.

Many people learn by example, so perhaps giving you some real-world examples of what would come under compensatory damages will help.

We’ve got examples of both actual and general compensatory damages below so that every possible situation has been covered.

As you can see, general compensatory damages are much more personal in nature.

This can make them harder to assess too since it takes into account personal facts about the plaintiff that will be different across every case as the plaintiffs change.

We’ll try to stick to a case that best represents how one of these cases can play out, no matter which state you’re in.

First, many compensatory damages cases that have merit don’t even make it to court. They often get settled out of court long before it comes to those legal procedures.

That said, when these cases do hit the courts, the damages must be proven to have negatively harmed the plaintiff with a definable injury. Expert evidence is possibly involved if the case isn’t so clear cut, too.

Speaking of cases that aren’t clear cut, let’s dive into an example of a compensatory damages case. That’d be Aref V. Lynch, where appellants and federal prisoners Yassin Aref, Kifah Jayyousi, and Daniel McGowan raised a case over their containment in communication management units, or CMUs, for years.

These CMUs prohibited family contact and other means of communication with the rest of the world, which was argued to be a violation of due process and worthy of damages under the Prison Litigation Reform Act, or the PLRA.

The injuries outlined included “loss of educational opportunity in the form of release preparation programming, reputational harm, violation of their First Amendment rights, and lasting harm to their familial relationships.”

The reason this case got complicated was the Limitation on Recovery section of the PLRA. It states that “No Federal civil action may be brought by a prisoner confined in a jail, prison, or other correctional facility, for mental or emotional injury suffered while in custody without a proper showing of physical injury.”

Counterarguments to this included that a constitutional violation did occur and that this itself is a type of mental or emotional injury, hence why unconstitutional actions are treated so seriously.

Ultimately, the court decided with the established reading of the PLRA’s Limitation on Recovery, so the court held that actual but intangible harms had occurred but the case failed since the prison official central to the case had qualified immunity.

This is a case that split the circuit but they eventually agreed that prisoner claims must be themselves split into injuries alleged or relief sought.

That’s probably as complicated as a compensatory case can get since it involves prisoners, the ever-changing prisoner treatment legislations, claims of first amendment violations, and a member of the case having qualified immunity.

The overwhelming majority of these cases would never get so complicated, so don’t be discouraged if you think you have a case.